Historically, most countries have seen a rise and then a decline in smoking. Sales of cigarettes took off around the year 1900 in richer countries, peaked by the 1980s and have since declined. A general decline in rates of smoking is apparent across all global regions, and for both sexes.

This has been especially marked in many higher-income countries. Rates of smoking have fallen for both men and women largely due to greater public awareness of the importance of a healthier lifestyle, as well as the introduction of various tobacco control measures including advertising bans, smoke-free environments, and higher taxation. Nevertheless, reduction in smoking prevalence tends to start plateauing at around 20% of a population, suggesting diminishing returns on tobacco control interventions. 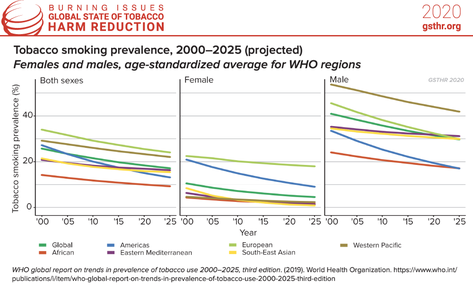