The ninth Conference of the Parties (COP9) to the Framework Convention on Tobacco Control (FCTC) concluded on Friday, with the status quo of international tobacco control proudly maintained by its host body, the World Health Organization (WHO). Held online, the majority of the virtual meeting was closed to the public and all but a handful of selected media representatives.

In contrast to the attendance of 2,360 NGOs at the climate COP26, the FCTC COP9 allowed just 21 handpicked NGOs to attend. None of these represent affected populations, who include the millions of people who have quit smoking by switching to safer nicotine products including vaping devices, nicotine pouches, snus or heated tobacco products, and yet find these products facing bans in many countries, with encouragement from the WHO. The organisation remains implacably opposed to the use of safer nicotine products in tobacco harm reduction, despite the significant independent and international evidence of their efficacy for smoking cessation. In our most recent report, Fighting The Last War: The WHO and International Tobacco Control, we argue tobacco control policy is frozen in time.

Professor Gerry Stimson, Emeritus Professor Imperial College London and Project Director for the Global State of Tobacco Harm Reduction, commented on the launch of the WHO's Global Tobacco Trends report.

"As the WHO publishes its latest report, it trumpets falling tobacco use. But the global health institution is celebrating failure. To see numbers reduce from 1.32 billion to 1.30 billion tobacco users over five years cannot be argued as evidence of a successful strategy. Eight million lives are lost every year due to smoking-related disease. What we are seeing is evidence of a dereliction of public health duty.

"With modern safer nicotine products, these technological disruptors such as vaping devices, nicotine pouches, heated tobacco products, we have the means at our disposal to end smoking and to end it soon. Global State of Tobacco Harm Reduction estimates put the number of users of harm reduction products at 100 million worldwide. Many smokers are put off from switching though, as a direct consequence of the distortion of public health messaging from the WHO and other tobacco control organisations funded by US philanthropic interests that seem to care little for the health of current smokers.

"Harm reduction is the third pillar of the tobacco control strategy named in the FCTC (1), along with supply and demand reduction. We urge the WHO to integrate harm reduction into its approach to tobacco control, as it already does for drug use and HIV/AIDS prevention, and to address current deficits in the WHO's MPOWER strategy by enabling it to become EMPOWERED - adding 'Engage with affected communities', 'Encourage smokers to switch to safer nicotine products' and 'Deliver accurate information about safer alternatives.'" 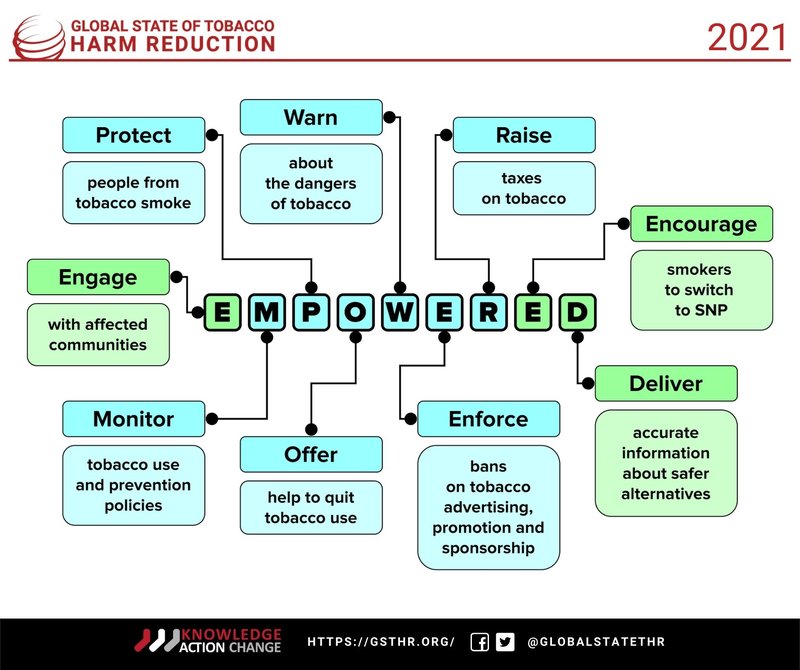 1) See Article 1d, page 11, Framework Convention on Tobacco Control, WHO 2005: “tobacco control” means a range of supply, demand and harm reduction strategies that aim to improve the health of a population by eliminating or reducing their consumption of tobacco products and exposure to tobacco smoke

The GSTHR project is produced with the help of a grant from the Foundation for a Smoke-Free World, a US non profit 501(c)(3), independent global organisation. The project and its outputs are, under the terms of the grant agreement, editorially independent of the Foundation.