In 2021, the Global State of Tobacco Harm Reduction (GSTHR) project published the first ever worldwide estimate of the number of vapers, which stood at 68 million in 2020.[i] New data from the February 2021 Eurobarometer 506 survey and other surveys offered a unique opportunity to update that figure. We also modified our projection process by taking both regional variations in market size and the actual year of origin of the underlying data into account. The GSTHR now estimates that there were 82 million vapers worldwide in 2021. 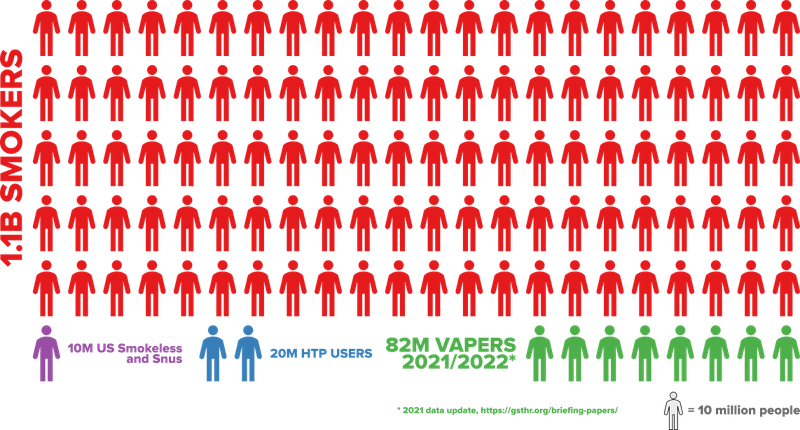 Why are we conducting this research?

Nicotine is one of the world’s most popular drugs, alongside alcohol and caffeine. Most people consume nicotine by smoking tobacco cigarettes. The World Health Organization (WHO) estimates that there are 1.1 billion smokers, about one in five of the global adult population. This figure has remained unchanged since 2000. Declines in the prevalence of smoking in some countries and population groups has been offset by rises elsewhere as well as by population increases. The health effects of smoking tobacco are well known, with an estimate of eight million premature deaths from smoking-related disease each year. This is three times more than the number who die from malaria, HIV and tuberculosis combined.

Options for smokers changed with the invention of the modern electronic cigarette which was patented in 2004. ‘E-cigarettes’ came onto the market in Europe and North America from around 2007 onwards.

There has been rapid uptake of nicotine vaping products in some countries in Europe and in North America. In the UK the proportion of the adult population using nicotine vaping products rose from 1.7% in 2012 to 7.1% in 2019. Data from the UK suggest a substitution effect, whereby many people who consume nicotine are choosing safer products. Nicotine vaping products are now the main tool that smokers use when they want to quit cigarettes in England.[ii] Research has also shown they are more successful than other methods.[iii]

Nicotine vaping devices and other safer nicotine products (SNP), including nicotine pouches, snus and heated tobacco products, are potentially disruptive innovations. As such, they have considerable potential to improve population health by displacing tobacco smoking. A key question is the rate at which SNP are replacing tobacco cigarettes. Mapping the uptake of nicotine vaping products is therefore important, but it is extremely difficult for many countries due to the cost.

Since 2018, the GSTHR [iv] has been collecting information on the prevalence of nicotine vaping as well as other SNP categories. The project maps the global, regional and national availability and use of SNP, the regulatory responses to them, and the public health potential of tobacco harm reduction. Information is collected from the literature and a network of national and regional correspondents across 201 countries (262 including territories and significant within-country regions). The GSTHR database compiles country-based information over time and product categories.

What was our previous estimation of the global number of vapers in 2020?

Data on the prevalence of e-cigarette use [v] were available from 49 countries based on survey data up to 2018. To address the problem of missing data we used an accepted epidemiological method of estimating countries with missing data by assuming similarity with countries in the same region and economic condition for which data points are available. This methodology is commonly used for estimating health status in the absence of national surveys.[vi]

Our estimation was adjusted using market data to arrive at a projection for 2020 of 68 million vapers globally.[vii]

What were the new data we had available?

There were several new data points by 2021. The largest was the Special Eurobarometer 506 (27 EU Member States), which was published in February 2021.[viii] Other new data points include the United Kingdom, Jordan, New Zealand, Taiwan and the United States.

There were three questionable data points in the dataset: Tonga, Uganda and Jordan. The data from these countries did not have a trusted source and indicated a high level of use considered unlikely to be accurate. Due to the poor availability of other data for their regions and income groups, their impact on all countries sharing their characteristics was very high. We therefore omitted these countries from the analysis when calculating average prevalence levels for each subgroup. Most of the new information on prevalence of vaping came from surveys conducted in 2020-2021 (66.7%).

How did we estimate the global number of vapers in 2021?

The estimation was based on the same assumptions as our previous work and had the same limitations. We used three factors - sales regulation status, WHO regions and World Bank (WB) income groups.

We adjusted survey data older than 2021 using data on market changes. We used Euromonitor data on vaping product market size from 2015 to 2021.

The largest market with the fastest growth rate is North America, mainly accounted for by the U.S., whose market size in 2021 was estimated at $10.3 billion, while Canada’s was $1.4 billion. This was followed by Western Europe with $6.6 billion, Asia Pacific with $4.4 billion and Eastern Europe with $1.6 billion. The smallest markets were in the Middle East and Africa with $490 million, Latin America with $122 million and Australasia with $118 million.

This variation translates into the following absolute market growth rates since 2015: Australasia 1.010, Latin America 1.012, Middle East and Africa 1.028, Eastern Europe 1.106, Asia Pacific 1.272, Western Europe 1.480, and North America 1.976. By taking into account both the actual year of survey data and the actual absolute growth rates for the regions, our forecast is adjusted for regional market growth, making it more reliable.

What is our estimation of the global number of vapers in 2021?

Compared to previous estimates, the 2021 figure shows a significant growth. We should keep in mind that underrepresented regions and income groups have a large impact on distorting our results. 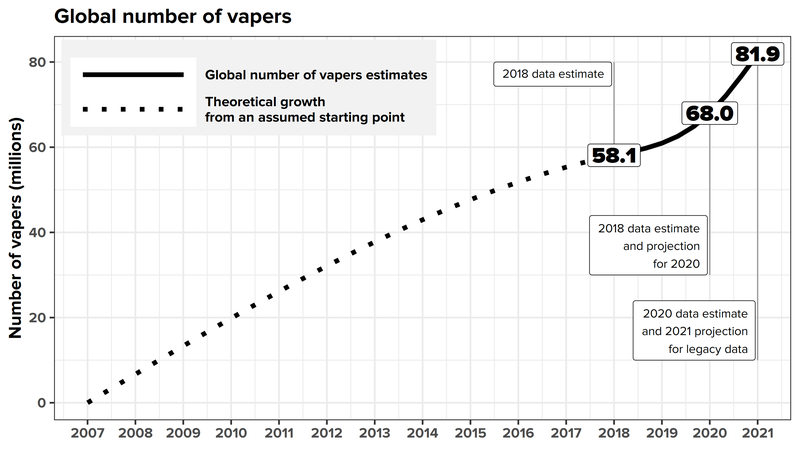 What does the increase in the global number of vapers mean for tobacco and nicotine policy?

Ambitions to achieve a smoke-free world will be enhanced through the rapid substitution of cigarettes by safer alternatives such as vaping, as more consumers choose to reduce their own health harms by using nicotine in less risky ways. The question is how quickly.

The global estimate of vapers based on the new data was 82 million, a significant but expected increase compared with our previous forecast, and indicative of a continued global uptake of nicotine vaping products. The increase is mainly accounted for by growth in North American and Western European markets. In higher income countries, the major debates about nicotine vaping are centred on the perceived threat of vaping products to young people, while ignoring their significant harm reduction potential for current adult smokers.

There remain huge gaps in data with only 49 countries having viable survey results.

Global health organisations, vaping product manufacturers and other SNP producers have also neglected the potential of safer nicotine products in low and middle-income countries (LMIC) where 80% of the world’s 1.1bn smokers live. With little or no access to smoking cessation support, citizens of LMIC are disproportionately affected by smoking-related death and disease, which under-resourced and overstretched health systems are poorly equipped to diagnose and treat.

Tobacco harm reduction using safer alternatives offers an unprecedented exit strategy to over a billion smokers worldwide. For decades, international tobacco control and the WHO have focused their efforts on the prohibition of combustible cigarettes, the stigmatisation of smoking and, arguably, of smokers. Concerningly, safer nicotine products and vaping are now in their sights. Ultimately, this policy will be recognised as counterproductive. For the first time, these products offer a range of positive inducements for people to switch from smoking, to add to the many disincentives.

Harm reduction options are already being used by an estimated 112 million people worldwide, with approximately 82 million using nicotine vaping devices, 20 million using heated tobacco products and 10 million using US smokeless and snus. To hasten the end of smoking while also helping 1.1bn current smokers switch away from combustible tobacco, harm reduction must become an integral part of the journey towards a smoke-free future.

For further information about the Global State of Tobacco Harm Reduction’s work, or the points raised in this GSTHR Briefing Paper, please contact [email protected]

Our funding: The GSTHR project is produced with the help of a grant from the Foundation for a Smoke Free World, an independent, US non-profit 501(c)(3) which, under US law, must operate independently of its donors. The project and its outputs are, under the terms of the grant agreement, editorially independent of the Foundation.

[ii] “[…] Using a vaping product is the most popular aid used by people trying to quit smoking. In 2020, 27.2% of people used a vaping product in a quit attempt in the previous 12 months. This compares with 15.5% who used NRT over the counter or on prescription (2.7%), and 4.4% who used varenicline. […]” McNeill, A., Brose, L., Calder, R., Simonavicius, E., & Robson, D. (2021). Vaping in England: Evidence update February 2021: a report commissioned by Public Health England. Public Health England. https://www.gov.uk/government/publications/vaping-in-england-evidence-update-february-2021

[v] See note on terminology: this is an instance where we are using the term ‘e-cigarettes’ as this is the term used in identified surveys. Our preferred term is ‘nicotine vaping’.